It's been a tough year for Gretchen Whitmer, "that woman from Michigan," as Donald Trump dubbed her. The Washington Examiner called  her "the Andrew Cuomo of the Midwest." Like Cuomo, she forced nursing homes to accept Covid patients, and a lot of people died. 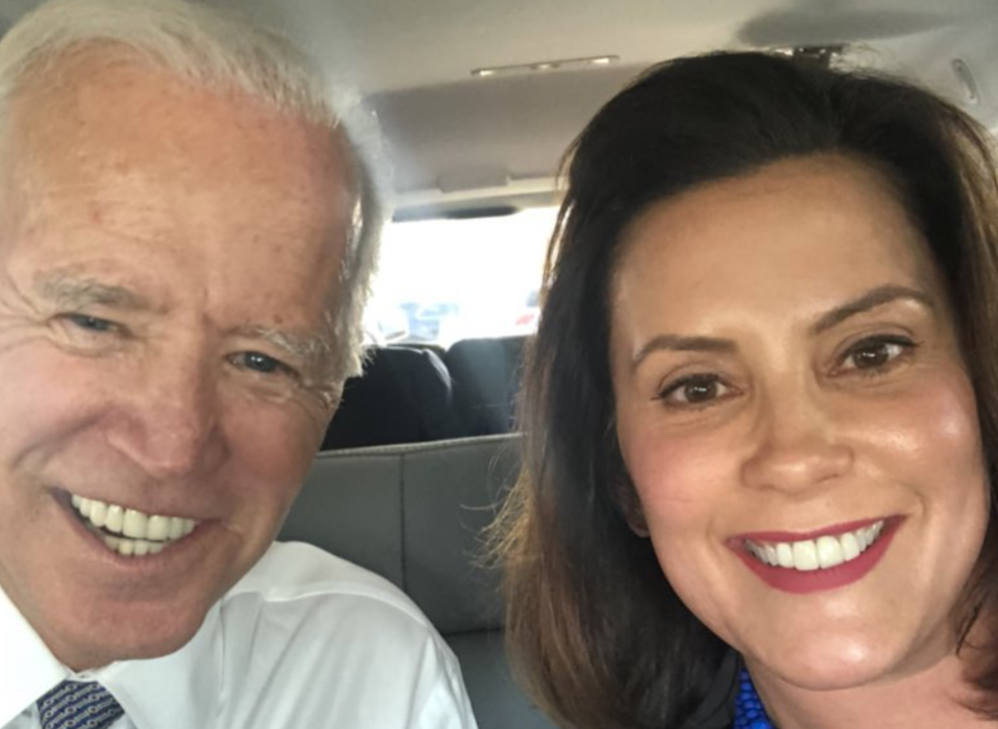 When the coronavirus hit Michigan in force last month, Whitmer had no clue what to do. So, she responded with a mixture of comical ineptitude and a weird kind of arbitrary fascism. She banned the sale of carpets and paint and potted plants. She told people they couldn't fish or go to church or drive alone to their own homes. But at the same time, Whitmer kept liquor stores, weed shops, and lotto kiosks open because, this was purely an epidemiological matter in the interest of the public health, those were 'essential services.' They also happen to provide massive tax revenue to her government. The whole thing was ridiculous. It was just a matter of time before the people suffering under this insanity said something about it.

Moreover, she was caught violating her own mask mandate at a bar in the capital city of Lansing with a group of friends. She’s also under fire for lying about a personal trip she took to Florida during the COVID-19 outbreak.

Now, thanks to a Freedom of Information Act lawsuit by Judicial Watch, the conservative legal organization in Washington that specializes in uncovering such things, we learn Whitmer deployed some scary Deep State troopers to keep her citizens in line.

The state hired an outfit called Applecart, which specializes in political campaigns and corporate goings on. Here's what Judicial Watch learned:

The records show that Health Department Director Robert Gordon was in contact with Dr. Ezekiel (Zeke) Emmanuel, a bioethicist who served as Special Advisor for Health Policy at Office of Management and Budget during the Obama administration and as a member of then-President Elect Joe Biden’s Public Health Advisory Committee.

In a March 27, 2020, email, Emanuel, acting as an advisor to the Whitmer administration, introduces Gordon to Sacha Samotin, a principal in a company called Applecart, urges the State of Michigan to hire.
Admitting he has an investment in Applecart, Emanuel tells Gordon.

A memo labeled “CONFIDENTIAL: NOT FOR DISTRIBUTION,” promotes Appleacart:

[A] leading NYC-based data science company that builds dense, accurate, and actionable maps of real-world relationships between individuals using publicly available data and a proprietary Social Graph platform. Applecart’s Social Graph catalogues more than 25 billion social relationships between 250M+ Americans.
***
To assist in the efforts to combat COVID-19, Applecart can use its Social Graph to generate high-value custom advertising audiences comprised of people who have personal or professional relationships with major company executives or state and local government officials. These audiences can be targeted with either a) the latest information about the actions that companies and governments must take to prevent the spread of Coronavirus or b) negative news stories that criticize the companies and governments for their inaction, in order to spur action.
***
Applecart can work to counter the threat of harmful misinformation by generating custom audiences comprised of the personal and professional networks surrounding key local and national reporters, editors, news producers, and other influential decision makers in media. Using these audiences, those fighting to stop the spread of Coronavirus can promote the latest public health information or pushback on widespread misinformation to the networks surrounding members of the media. This approach will ensure the high visibility of accurate information about how to prevent the spread of virus and will counter misinformation within the networks that surround and inform journalists. Ensuring that members of the media and those they trust are getting the latest, high quality information is the best way to ensure that the public at large receives the same.
***
Applecart can mine its Social Graph to assemble lists of employees of restaurants, bars, movie theaters, and other businesses that have been mandated to close during the COVID-19 crisis and make these lists available to government agencies, as well as grocery stores, pharmacies, and other businesses, who may be in need of extra labor during a time of extraordinary demand.
***
Applecart can mine its Social Graph to identify a list of Americans over the age of 65 and, for each, their closest neighbors under the age of 40. Public and private sector actors looking to combat COVID-19 can then call or text the neighbors, in order to enlist them as volunteers to procure and deliver food and medicine to their older neighbors, while they are sheltering-in-place.
Happy you give out all that personal information? Well, your government can use it against you. It's like East Germany's Stasi, except with computers, which cut down on the number of human spies.
One of the Stasi's main tasks was spying on the population, primarily through a vast network of citizens turned informants, and fighting any opposition by overt and covert measures, including hidden psychological destruction of dissidents.The Stasi maintained greater surveillance over its own people than any secret police force in history. The Stasi employed one secret policeman for every 166 East Germans.
Applecart wasn't the only outside company hired by Michigan. It also contracted with pollster Frank Luntz. You've seen him on TV and probably wondered why someone would put him on TV. Here's what he sold to Michigan.
They “tested specific words, sentences, phrases, and attributes Americans need to hear to change their behavior and stop the spread of the coronavirus.” A significant part of the report analyzed Democrat-vs.-Republican responses. For example, one of several “warnings” Luntz emphasized, “Many Republicans refuse to follow guidelines because they argue the science keeps changing. It’s up to you to communicate – at the outset – that the science is settled.”

Much of the Luntz Report deals with wordsmithing. A table in the report categorizes words as “Words to Use” and “Words to Lose.” For example, use “protocols” and lose “orders & decrees;” use “social distancing” and lose “physical distancing.” Another Luntz recommendation is to “Call It the Pandemic,” based on his surveys that found the word “pandemic” is “more significant, serious, and scary” than the alternatives “COVID-19” and “The Coronavirus.”
We don't know how much Frank got for this wisdom. Heck, I could have come up better stuff than that.

Welcome to government in the 21st Century.
~ Eabarcrombaigh
"We live in an age in which it is no longer possible to be funny. There is nothing you can imagine, no matter how ludicrous, that will not promptly be enacted before your very eyes, probably by someone well known."
~ Malcolm Muggeridge

Let's revisit Obama's birth certificate
​​​​​​​"Upon reading special counsel John Durham’s 27-page indictment of attorney Michael Sussman, I found myself asking, “Is there anything Perkins Coie lawyers would not do to keep their Democrat clients in power?” writes author Jack Cashill. Read And Comment.
I swear, the climate will kill us yet
Let's check in the globalistical warmenists, who are having to shout real loud to be heard over the vaccinationists. Read And Comment.
Are you mad as hell? And won't take it anymore?
I don’t have to tell you things are bad. Everybody knows things are bad. It’s a depression. Everybody’s out of work or scared of losing their job. The dollar buys a nickel’s worth, banks are going bust, shopkeepers keep a gun under the counter. Punks are running wild in the street and there’s nobody anywhere who seems to know what to do, and there’s no end to it. Read And Comment.
Little Tony caught with his hand in the petri dish
Anthony "Little Tony" Fauci is the highly paid bureaucrat who has assumed the authority to tell us we must wear masks and get vaccinated and get locked down. Few people know that Tony has been playing around for years with the Kung Flu virus and the Wuhan Lab from whence it came. Read And Comment.