New Plan: Punch a purple-haired freakshow in the face 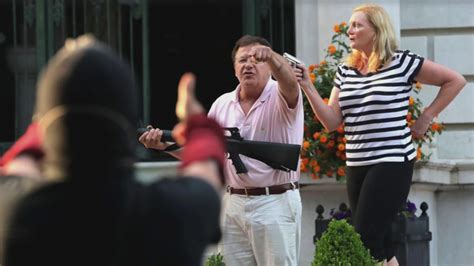 Will we reach a tipping point at which law abiding people start to fight back physically against the violence of The Left?

A pro-life group, Wisconsin Family Action, had its office set ablaze on Mother’s Day. The instigators scrawled a message that read, “If abortions aren’t safe, then you aren’t either.” Attacks on pro-life centers are only the latest in the long history of leftist violence.

Has it gotten personal with you yet? It got personal for U.S. House Majority Whip Steve Scalise, who was shot in 2017 by James Hodgkinson, a left-wing political activist. Or Senator Rand Paul, who was violently attacked by a neighbor, a socialist and registered Democrat, while Paul was out mowing his yard. Then Paul and his wife were attacked by a Black Lives Matter mob outside the White House after leaving the RNC convention.

For the last two years, we’ve seen BLM and Antifa pull innocent people from cars and pummel them in the name of blatant racism George Floyd and get away with it. We watched Kyle Rittenhouse go on trial for clearly defending himself against the brownshirts. Things are going to get worse before they get better.
How can we beat a domestic enemy with hugs? We can’t. They want us dead, yet many conservatives and Republicans would rather turn the other cheek than curl up their fists and punch back.
Unlike Mayor Lightfoot, I am NOT suggesting you shoot people. What I AM saying is we need a new plan, and that plan MIGHT involve punching a purple-haired freakshow in the face. We are dealing with toilet humans who have never been held responsible for their actions. Defend yourselves.
But, as he notes, we face not only the punks but also law enforcement and the courts, who are not on our side.
And don’t count on the police to help you ward off Biden’s bolshies. Almost half of Antifa/BLM had their charges dropped after they violently gutted Portland. Some got arrested and returned to riot the same day.
Remember how leftist prosecutor went after Mark and Patricia McCloskey for standing outside their home with guns to defend their property against leftist rioters?

By the way, it appears that Rittenhouse knew how to use a gun, and I can tell you that carrying and using a gun is serious business and not for someone without proper training. Informed people who do carry are quite aware of the consequences. So I don't advocate it.
But at some point, and it took years, the colonists did finally take up arms against the British. We have suffered under the lefitsts for years, as well, but is this a tipping point?
~ Linklater
"We live in an age in which it is no longer possible to be funny. There is nothing you can imagine, no matter how ludicrous, that will not promptly be enacted before your very eyes, probably by someone well known."
~ Malcolm Muggeridge