Is there a future for Christianity?

"In Australia, Christians are having to choose between their church or their job."
~ headline, Christianity Today

A brilliant writer, one of my favorites, who writes under the pseudonym The Z Man, projects a bleak future for Christianity. Those who might be disturbed by this should read all of his essay. As he says at the end, "It is easy to see why Christians prefer not to think about this stuff." 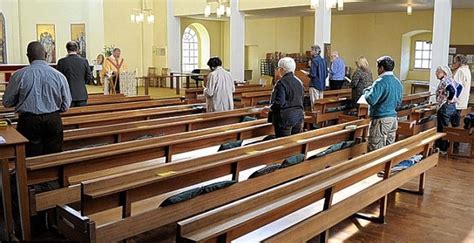 A question that never gets asked is whether or not Christianity, however one wants to define it, can survive in the modern West. Those opposed to Christianity, which is the entirety of the managerial class, never discuss it. Actual Christians are aware of the challenges they face, but they just assume they are on the side of angels, literally and figuratively, so the question does not require an answer. If you are sure yours is the one true faith, then the survival question has been answered.

Looking at survey data, just three states, Alabama, Tennessee and Utah, have a weekly church attendance over 50%. On the other side, New Hampshire is the only state that has a majority who never attend services at all. Vermont, Maine and Massachusetts are all in the high 40% range and on their way to being majority non-Christian. Given that Yankeedom has ruled the country since Gettysburg, it is no wonder that the rest of the country is slowly losing its religion too.

In Europe things are bleak for the Christians. Four countries, Belgium, the UK, France
and the Czech Republic have majorities who have never attended church. Spain and the Netherlands are in the high 40’s. Poland and Ireland are the only two countries with a majority of church goers, but in both cases, the younger population has caught the modern disease and they avoid church. In Poland youth attendance is 27% and in Ireland it is at 33% according to recent surveys.

In fairness, there are a few modifiers to these numbers. One is how one defines regular church attendance. Most surveys break it down between weekly, multiple times per year, rarely and never. One can still identify as a Catholic, even if one is only going to mass on a monthly basis. Similarly, an adult that does not attend service, but went to church as a child and was baptized into the faith could still identify as a Christian, but not necessarily a practicing one.

The point being is that you can quibble with the numbers and whose survey is better, but the overall picture does not change. Christianity in the West is not just on the wane, but in many places, it is on the way out. When you shift from the private sphere to the public one, it is rare to find any discussion of Christianity. The Christians allowed on stage must profess an undying devotion to Jewish people, Israel and various myths and legends important to the Jewish people.

This void in the managerial class is being filled by people who define Christian as the bad whites they despise. The recent gay marriage bill made possible by the Republican party, allows the IRS to strip churches of their tax exempt status if they are not willing to play along with the homosexual marriage charade. Like the Obama health care bill, the point is mostly about attacking Christians. The people in charge want the believers to know that they are not welcome in America.

This is where the survival question comes into play. Most people who regularly attend services think they have a constitutional right to their faith. Evangelicals, for example, when they are not celebrating Israel, are waving the flag. These are people who not only think they are on the side of angels, but they also think they have the law on their side with regards to how they practice their faith. These people are completely unprepared to defend their faith from the coming assault.

Mainstream Protestantism has been thoroughly corrupted. On the east coast, the surest sign you are near an Episcopal church is the rainbow flag. That sect has given itself over completely to the worship of homosexuals. The Southern Baptist Convention now sounds like the grievance studies depart at a third tier state college. The Methodists are in a civil war over the usual questions. Of course, the Catholic church long ago succumbed to the pink mafia that took over the clergy.

The fact is, the Christian in modern America is under assault not just from the historical enemies of the faith, but from the institutions he has relied upon to defend religious liberty in America. The churches themselves have signed onto the programs that promise to make it impossible to be a Christian, at least one who thinks Scripture is more than just some pointless stories. Just as important, the believers seem to be psychologically unprepared for the fight.

From a purely secular and analytical perspective, religions evolve to solve the basic questions of human society. Religions help explain the natural world and provide authority to the customs and traditions of a people. Often, religion provides at least part of the answer to the central question, who are we? It is religion that helps people understand the observable world around them. That ranges from the natural phenomenon to the nature of human relations.

The modern West is increasingly defined by the deliberate avoidance of observable reality, along with prohibitions against noticing certain things. The authority for these prohibitions is mob rule, guided by an invisible hand that is on the list of things no one is allowed to mention. Christianity offers an alternative source of authority and Scripture encourages the believer to engage with the human condition. It is not hard to see why that invisible hand guiding the mob hates Christians.

This brings us back to the beginning. Can Christianity survive? The answer depends a lot on how one defines Christianity. Within this century the mainline churches will have disappeared, their nicer buildings having been made into museums. Baring a cataclysm that derails modernity, institutional churches are doomed. That will leave the believers to fend for themselves as ad hoc communities. They will have to redefine what it means to be a Christian in order to survive the onslaught.

That presents another problem. Most of the people who would join an ad hoc community of believers embraces the universalism and openness that has been the ruin of Christianity in the West. In a world where demographic reality is the defining feature, the refusal to recognize demographic reality is a suicide pill. In other words, if Christianity is to survive, it will have to become something different. Christians will have to find the authority for new survival skills within Scripture.

It is easy to see why Christians prefer not to think about this stuff. It is a complex problem that defies simple answers. It is a lot easier to type “Christ is King!” in a Gab post than think about these challenges. Like all the other problems facing Western people, the future does not lie in the past. Whatever comes next for Christians will be fashioned from what is available in the future. Like most Western traditions, the old Christianity will not survive the revolution.

A good bit of what we think of as Western Civilization came out of Christianity, so that will likely be lost as well.