J. Edgar Hoover smiles down on his legacy 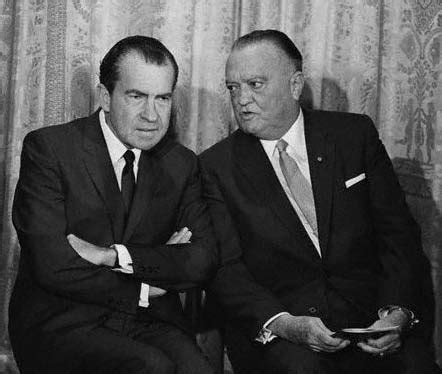 Do you really think the FBI and CIA are dedicated to protecting our country? As Donald Trump's tenure demonstrated, these are in fact political agencies -- and always have been. Wade through the mucky history.

How does he know? What do they have on him?

Schumer wasn’t alone in warning of U.S. intelligence agencies’ penchant for politicized revenge. A little over a week later, Daniel Benjamin, who had served as the principal counterterrorism advisor for former Secretary of State Hillary Clinton, scripted the scenario for Politico Magazine, writing:

Leakers and whistleblowers won’t hesitate. What [former Deputy CIA Director] Morell and other intelligence veterans are too decorous to mention is that Trump’s treatment of his spies will also come back to bite him in the form of leaking and whistleblowing. The intelligence community doesn’t leak as much as the Pentagon or Congress, but when its reputation is at stake, it can do so to devastating effect.
It's well known that founding FBI Director J. Edgar Hoover kept secret files on politicians, including presidents.
For example, on March 22, 1962, Hoover had lunch with President Kennedy. Hoover told him that through bugs and wiretaps, the FBI had learned that Jack was having an affair with Judith Campbell Exner, a twenty five-year-old divorcée. Hoover informed the president that Exner was also having an affair with Chicago mob boss Sam Giancana. Because Hoover knew such tidbits, no president would fire him.
Perhaps what worried Schumer was this, as Ronald Kessler, an American journalist and author of 21 non-fiction books about the White House, U.S. Secret Service, FBI, and CIA, writes:
“The moment [Hoover] would get something on a senator,” said William Sullivan, who became the number three official in the bureau under Hoover, “he’d send one of the errand boys up and advise the senator that ‘we’re in the course of an investigation, and we by chance happened to come up with this data on your daughter. But we wanted you to know this. We realize you’d want to know it.’ Well, Jesus, what does that tell the senator? From that time on, the senator’s right in his pocket.”
Recall that President Nixon undertook to dismantle much of the administrative state. John Marini, Professor of Political Science at the University of Nevada, has written about this in his book Unmasking the Administrative State. The Crises of American Politics in the Twenty-First Century.
Nixon was the first elected president to see that administrative rule was incompatible with the political rule.  Without access to those who have actual power (bureaucracy), it becomes impossible for the people to consent to government.  In his second term, Nixon attempted to decentralize political and administrative power, returning it to the states and local governments.  He failed.  Some forty years later, it appears that Donald Trump has attempted to restore political rule, under conditions far less favorable than those faced by Nixon. It was an FBI executive who took Nixon down, feeding information to the Washington Post reporters Woodward and Bernstein. His name was Mark Felt. Woodward describes Felt as a loyalist to and admirer of J. Edgar Hoover. After Hoover's death, Felt became angry and disgusted when L. Patrick Gray, a career naval officer and lawyer from the Civil Division of the Department of Justice had no law enforcement experience and was appointed as Director of the FBI over Felt, a 30-year veteran of the FBI.

There's more to it than a personal vendetta. According to Wikipedia:
Felt, who had long had a dim view of the Nixon administration, began passing pieces of information to Woodward, although he insisted that Woodward keep the FBI and Justice Department out of anything he wrote based on the information. The first time Woodward used information from Felt in a Washington Post story was in mid-May 1972, a month before the Watergate burglary, when Woodward was reporting on Arthur Bremer, who had attempted to assassinate presidential candidate George C. Wallace.

Commenting on Felt's motivations for serving as Deep Throat, Woodward wrote, "Felt believed he was protecting the bureau by finding a way, clandestine as it was, to push some of the information from the FBI interviews and files out to the public, to help build public and political pressure to make Nixon and his people answerable. He had nothing but contempt for the Nixon White House and their efforts to manipulate the Bureau for political reasons."
A really good summary of all this has been written by Angelo Codevilla, Senior Fellow of the Claremont Institute and professor emeritus of International Relations at Boston University. He served as a U.S. Navy officer, a foreign service officer, and professional staff member of the Select Committee on Intelligence of the United States Senate.

It's long, and I can't do it justice by quoting snippets. But here's a taste of it.
America’s Intelligence agencies are the deep state’s deepest part, and the most immediate threat to representative government. Intelligence officials abuse their positions to discredit opposition to the Democratic Party, of which they are part. Complicit with the media, they leverage the public’s mistaken faith in their superior knowledge, competence, and patriotism to vilify their domestic enemies from behind secrecy’s shield.

When the U.S. established CIA as an agency responsible only to the president, it broke new ground. Nothing concerned the authors of the 1947 National Security Act that established it so much as preventing it from interfering in domestic matters.

Yet, ab initio, CIA’s founding generation concerned itself with making national policy, arguably more than with anything else, and transmitted that concern to its successors. Today’s meddling in elections and trying to overturn their results is a logical consequence.

The Soviet Cheka (KGB), the Nazi Gestsapo, the Chinese Communists’ Intelligence service (which they called “the teeth of the dragon”) as well as their contemporary epigones, are not about knowledge—not even about discovering who the regime’s enemies are. They are weapons—what the Soviets called the Party’s “sword and shield,” made to hurt whomever the Party designates as enemies. Because the power to hurt people unaccountably is tyranny’s quintessential tool, competent tyrants limit such agencies’ powers by periodically purging them.
I encourage you to read the whole thing. If you do you will understand totday's headlines.
~ MacCnusachainn
"We live in an age in which it is no longer possible to be funny. There is nothing you can imagine, no matter how ludicrous, that will not promptly be enacted before your very eyes, probably by someone well known."
~ Malcolm Muggeridge

What the vaccine hath wrought
The federal Vaccine Adverse Event Reporting System (VAERS) records more than 500,000 adverse events after COVID vaccines. The most common disorders reported after COVID-19 vaccinations in the U.S. include temperature-related issues (226,457), skin problems (174,793), and a category that includes movement, muscle, nerve, neuropathy, numbness, and paralysis (164,200). Read And Comment.
The Madness: Swan boats, triggers warnings, masked (naked) cyclists
"Even before COVID-19, the prevalence of mental illness among adults was increasing. In 2017-2018, 19% of adults experienced a mental illness, an increase of 1.5 million people over last year’s dataset." ~ Mental Health America Read And Comment.
When the police knock on your door
“And how we burned in the camps later, thinking: What would things have been like if every Security operative, when he went out at night to make an arrest, had been uncertain whether he would return alive and had to say good-bye to his family?" ~ Aleksandr I. Solzhenitsyn Read And Comment.
Let's revisit Obama's birth certificate
​​​​​​​"Upon reading special counsel John Durham’s 27-page indictment of attorney Michael Sussman, I found myself asking, “Is there anything Perkins Coie lawyers would not do to keep their Democrat clients in power?” writes author Jack Cashill. Read And Comment.