In the land of the naked kings

Somewhere between January 6 and January 20 I became paralyzed by the surreality of it all. In an obviously fraudulent election we had placed a corrupt, senile, second-rate politician in the White House. No one in authority was doing anything about it. Everyone was pretending he was a real president. 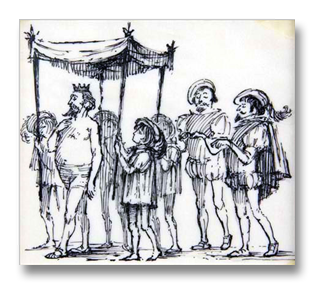 I stopped my usual reading; I couldn't handle it. But I came across a blog I'd visited from time to time: Neo. She was able to write, and she was intelligent and calm. Interestingly, her commentors were equally intelligent. Now I check her every day.

If you want to understand what we're living under today, you won't get it from Twitter or Facebook. You'll have to do some real reading, and it will take some time and concentration. Let me recommend a couple of posts on Neo, and then a couple of pieces she references.

1.  The ghost of Biden past gave a speech last night. Here she refers to the Hans Christian Andersen tale “The Emperor’s New Clothes.” The story: Some swindlers convinced the Emporer to parade around without any clothes on.

2. The cost of playing the “The Emperor’s New Clothes” game. Here Neo introduces the term pseudo-reality, an apparent reality that is in fact a delusion. It comes from an essay, "Psychopathy and the Origins of Totalitarianism," by Dr. James Lindsay, an American-born author, mathematician, and political commentator, Dr.  Lindsay has written six books spanning a range of subjects including religion, the philosophy of science and postmodern theory.

This essay is easy to read, but he gives no examples. You'll have to think of your own as you read, which isn't hard to do. This is just one snippet:

It must be observed that people who accept pseudo-realities as though they are “real” are no longer normal people. They perceive pseudo-reality in place of reality, and the more thoroughly they take on this delusional position, the more functional psychopathy they necessarily exhibit and thus the less normal they become. Importantly, normal people consistently and consequentially fail to realize this about their reprogrammed neighbors. Perceiving them as normal people when they are not, normal people will reliably misunderstand the motivations of ideological pseudo-realists—power and the universal installation of their own ideology so that everyone lives in a pseudo-reality that enables their pathologies—usually until it is far too late.

Here are few pseudo-realities: Donald Trump colluded with Russia, Joe Biden won fair and square, Biden is actually in charge at the White House, our greatest threat is domestic terrorism, we are destroying the Earth.

3. Neo also introduces “Live Not By Lies,” an essay by Aleksandr Solzhenitsyn, the Russian novelist, philosopher, historian, short story writer and political prisoner. If you think the surreality in which we live echoes totalitarian nations, you're right. Here's a piece of his essay:

And therein we find, neglected by us, the simplest, the most accessible key to our liberation: a personal nonparticipation in lies! Even if all is covered by lies, even if all is under their rule, let us resist in the smallest way: Let their rule hold not through me!

And this is the way to break out of the imaginary encirclement of our inertness, the easiest way for us and the most devastating for the lies. For when people renounce lies, lies simply cease to exist. Like parasites, they can only survive when attached to a person.

We are not called upon to step out onto the square and shout out the truth, to say out loud what we think—this is scary, we are not ready. But let us at least refuse to say what we do not think!
There is a way out! And it requires courage from each of us.
~ Eabarcrombaigh

Clowns to the left of me, jokers to the right
We're fools to put up with these clowns on the Left and the Right. Read And Comment.
Getting Trump: It was always about the money
POTUS Trump was disrupting the global order of things in order to protect and preserve the shrinking interests of the U.S. He was fighting, almost single-handed, at the threshold of the abyss. Read And Comment.
The man who wasn't there
Trump, seeing that he had no supporters, except 75 million American voters, decided to let The Left have it and reveal what fools they are. And here's what we got. Read And Comment.
Laugh Tracks: Laughter is the best ointment
“Dad always thought laughter was the best medicine, which I guess is why several of us died of tuberculosis.” - Jack Handey Read And Comment.