How a nation can go mad 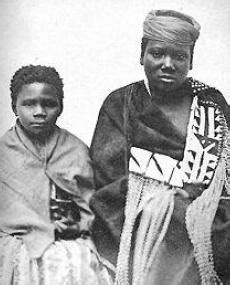 In a column entitled "The Valley of Greta" the writer known as The Z Man tells the true story of a young African woman, who managed to persuade her people to kill all their cattle, resulting in 80 percent of the people dying. This is well worth your time if you want to understand the madness all around us.

In April 1856, a young girl from the Xhosa tribe named Nongqawuse walked with a friend to the banks of the Gxarha River, near the Indian Ocean. This was in an area that is now the Eastern Cape of South Africa. The two girls met two men who claimed to be ancestor spirits bringing a message from their ancestors: The Xhosa dead will rise up and lead the people into an era of freedom and prosperity.

In order for this to happen, the strangers explained, the Xhosa people would have to abandon all of their old ways. They specifically said that witchcraft, sorcery, and sexual promiscuity had to be ended. The Xhosa people were to dedicate their time to building new pens for cattle and new fields for the new crops that would suddenly spring forth with the arrival of their spirit ancestors.

There was one catch to this. The Xhosa were a people who depended primarily on cattle and the growing of crops to feed their cattle. The prophecy passed to Nongqawuse stipulated that the new era of prosperity would only come when the Xhosa killed all of their cattle and destroyed the means with which to raise them. This great leap of faith is what would usher in the triumph of their people.
Incredibly, the Xhosa people, upon hearing this tale from Nongqawuse and her friend, embarked on a campaign of killing their cattle. Not everyone was convinced that this was the right thing to do, but many accepted the prophecy, mostly because important members of the tribe had said they accepted it. This validation from people in authority was enough to convince them the prophecy was real.

Nongqawuse predicted that the prophecy would be fulfilled on Feb. 18, 1857, when the sun would turn red. This did not happen, so Chief Sarili went to the river to visit with the girls and came back convinced they got the date wrong. The prophecy would come true in eight days, so the people had better get cracking on the cattle killing in order to be ready for the great transition to the glorious future.

The result of this lunacy was that 80 percent of the population died from the subsequent famine caused by the cattle killing. It seems incredible to modern people that a population would try to commit suicide because a teenage girl claimed she saw the future, but we live in an age in which Greta Thunberg is treated like a prophet by the environmental movement. She is our Nongqawuse.

The general consensus as to why this happened is that the Xhosa people were under a great deal of pressure from other tribes as well as the white man. The Boers and the British were a great technological challenge, but they also brought new disease, like the “lung sickness” that affected Xhosa cattle. For a primitive people, it surely must have seemed like they were cursed in some way.

That was what made Nongqawuse possible. She gave the men in charge of her people something they desperately wanted to hear. Their status and authority were under pressure, as they had no answers for the challenges they faced. Nongqawuse provided a way to resolve those fears and anxieties. The prophecy gave the leaders purpose and the authority to compel their people to act on the prophecy.

This provides some insight into what is going on with the political elites of the West and their embrace of the cult of climate change. Consider the flamboyant Secretary of Transportation for the Biden administration, Pete Buttigieg. He spends his days preaching about electric cars and how they will free us from the shackles of fossil fuels, even though he has no idea how this will work or if it can work.

It is not even clear that he believes in Gaia or that she is vexed at your lawnmower, but believing the climate-change prophecies solves a problem for him. When you are sure Gaia is angry at Western man for his racism and lawnmowers, but you are impotent to do anything about it, believing in the mysteries of electric cars is a nice escape. Instead of being a meaningless placeholder in government, Pete Buttigieg is a bringer of hope.

You get a whiff of this from European leaders when they talk about the looming natural-gas shortage this winter. They often talk about it as a necessary step in the transition to what they call renewable energy, a thing that does not exist. It is as if they are stimulated at the thought of people huddled in the dark, getting what heat they can from burning the last of their furniture.

The job of the green apparatchik in the E.U. is to persuade the people to overcome their fear of cold showers in winter. They imagine themselves one day on those Soviet-style posters, striking a heroic pose as they lead their people away from the land of smokestacks and warm houses to the glorious future. What lies ahead does not matter as the crusade gives the dreary functionaries a reason to live.

If the only result of this strange cult that has gripped so many of the ruling class resulted in nothing more than weird public statements, no one need care. The Xhosa example is a good reminder that when powerful people come to believe insane things, they will try to impose that insanity on their people. This is what we are seeing in the West as the greens try to roll back the last three centuries of technological progress.

Interestingly, the failure of the prophecies did not wake the Xhosa people up to the fraud that was being perpetrated on them by their leaders. When the dates came and went, the believers simply turned on the nonbelievers, blaming their lack of faith for the prophecies not being fulfilled. Again, this is something we see with the environmental movements in the West. Your lack of faith is the real problem.

The example of the Xhosa is something to keep in mind as we see the greens implement their agenda. The collapse of Sri Lanka due to the embrace of green agriculture, which collapsed the economy, does not register. The revolt of Dutch farmers over what is literally a cattle-killing scheme is not causing anyone in charge to reconsider their plans. For the zealots, none of this matters.

This is what happens when fanatics are put in charge. They have no internal mechanism to reconsider their fanaticism, so they go as far as reality will let them and then they are destroyed. When the fanatics are put in charge of a society, they take that society with them into the abyss of their fanaticism. The suffering we see coming from green policies is, to the believers, proof that the policies are working.

One final lesson from the Xhosa is that after the death of 80 percent of their people, the remainder did not turn on the remaining believers. In fact, the location of the prophecy is still called the Valley of Nongqawuse. The skeptics were called “the stingy ones” for their unwillingness to sacrifice their cattle to the cause. It is not hard to imagine something similar in the ruins of the West. Those who warned about the dangers will be remembered as the deniers by the people in the Valley of Greta.
Here is our own modern day Nongqawuse and some of the leaders she has bamboozled.
~ Trengrouse
"We live in an age in which it is no longer possible to be funny. There is nothing you can imagine, no matter how ludicrous, that will not promptly be enacted before your very eyes, probably by someone well known."
~ Malcolm Muggeridge