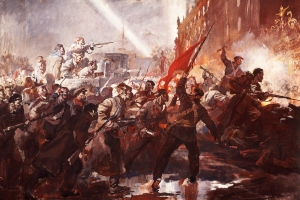 Here’s what the Russian revolution was like, writes Gary Saul Morson, Professor of the Arts and Humanities at Northwestern University.

Between 1900 and 1917, waves of unprecedented terror struck Russia. Several parties professing incompatible ideologies competed (and cooperated) in causing havoc. Between 1905 and 1907, nearly 4,500 government officials and about as many private individuals were killed or injured. Between 1908 and 1910, authorities recorded 19,957 terrorist acts and revolutionary robberies, doubtless omitting many from remote areas. As the foremost historian of Russian terrorism, Anna Geifman, observes, “Robbery, extortion, and murder became more common than traffic accidents.”

Anyone wearing a uniform was a candidate for a bullet to the head or sulfuric acid to the face. Country estates were burnt down (“rural illuminations”) and businesses were extorted or blown up. Bombs were tossed at random into railroad carriages, restaurants, and theaters. Far from regretting the death and maiming of innocent bystanders, terrorists boasted of killing as many as possible, either because the victims were likely bourgeois or because any murder helped bring down the old order. A group of anarcho-­communists threw bombs laced with nails into a café bustling with two hundred customers in order “to see how the foul bourgeois will squirm in death agony.”’

What’s going on today in the United States? Look at the headlines:

Back to Russia. How did educated, liberal society respond to such terrorism? Morson writes. What was the position of the Constitutional Democratic (Kadet) Party and its deputies in the Duma (the parliament set up in 1905)?

Though Kadets advocated democratic, constitutional procedures, and did not themselves engage in ­terrorism, they aided the terrorists in any way they could. Kadets collected money for terrorists, turned their homes into safe houses, and called for total amnesty for arrested terrorists who pledged to continue the mayhem. Kadet Party central committee member N. N. Shchepkin declared that the party did not regard terrorists as criminals at all, but as saints and martyrs. The official Kadet paper, Herald of the Party of People’s Freedom, never published an article condemning political assassination. The party leader, Paul Milyukov, declared that “all means are now legitimate . . . and all means should be tried.” When asked to condemn terrorism, another liberal leader in the Duma, Ivan Petrunkevich, famously replied: “Condemn terror? That would be the moral death of the party!”

How are our elites responding to the violence in our streets?

Morson conludes: In Russia, Stalin proclaimed “the intensification of the class struggle” after the Revolution, entailing an unending series of arrests, executions, and sentences to the Gulag. What meets no resistance does not stop.