“Only barbarians are not curious about where they come from, how they came to be where they are, where they appear to be going, whether they wish to go there, and if so, why, and if not, why not. ” ~ Isaiah Berlin 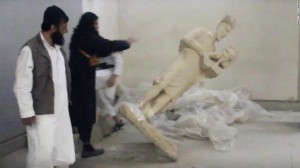 Remember how much fun the barbarians of ISIS had destroying statues a few years ago?

Islamic State militants ransacked Mosul’s central museum, destroying priceless artefacts that are thousands of years old, in the group’s latest rampage which threatens to upend millennia of coexistence in the Middle East.

“The birthplace of human civilisation … is being destroyed”, said Kino Gabriel, one of the leaders of the Syriac Military Council – a Christian militia – in a telephone interview with the Guardian from Hassakeh in north-eastern Syria.

“In front of something like this, we are speechless,” said Gabriel. “Murder of people and destruction is not enough, so even our civilisation and the culture of our people is being destroyed.” 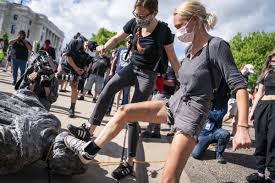 They’re pulling down statues simply because they are statues. Our barbarians have no idea what they mean. Did I say no idea? I did.

Our elitist barbarians are getting in on the action, too!

Popular Mechanics offers: “How to Topple a Statue Using Science.”

Then, “Museum curator tweets advice on how to destroy bronze statues with chemicals after BLM protests. Says next target is memorial to ‘racist’ Winston Churchill.”

And now: Calling the recent US trend of angry mobs destroying statues “inspiring but a bit amateur,” leaders of ISIS and the Taliban have agreed to send advisors to Antifa and other far left groups on how to erase historical artifacts.

Okay, that last one is satire. Or is it?